Jason Marsden
Vito Cappelletti (voiced by Jason Marsden) is an Italian chef who owns his own restaurant, Vito's Pizzeria.

Vito wears a green shirt, a white apron, and a red scarf. He also wears a chef's hat, dark green plaid pants, brown shoes, and wears a watch on his left wrist. He is balding with brown hair around his sides and has a moustache. He speaks with a strong Italian accent.

In the monthly comic book series, Vito appears older and has a white mustache. 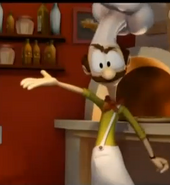 Add a photo to this gallery
Retrieved from "https://garfield.fandom.com/wiki/Vito_Cappelletti?oldid=132729"
Community content is available under CC-BY-SA unless otherwise noted.