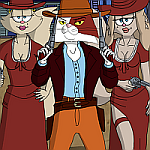 I have been Garfield fan since I saw on TV "Garfield on the Town" in 1993, later I started reading comics with him and watching the rest of the movies.

So far I have watched cartoons and films with Garfield in various language versions:

As for activity on this Wiki, it became more regular in 2014, which resulted in my promotion to Admin. Currently, I am sharing those duties with three more members of this Wiki, who have indeed really great people making the development of this Wiki real pleasure. :)

Myself, I appreciate a civilized and logical discussion about various topics as long as it remains materially rational. Life experience has taught me to despise towards trolls, bullies, cheaters, propagandists, haughty fools with master race syndrome and similar kinds of individuals, thus do not be amazed, if your fooling around here ends up with a ban. This Wiki is run for Garfield fans, not for on-line rowdies.

You can also find me on other wikis:

A couple of assorted images

That's how should Mona look in cartoon.

My concept for Miss Kitty.

Garfield and Friends meets Icewind Dale 1.
Add a photo to this gallery

My favorite segments from Garfield and Friends

My favorite The Garfield Show episodes

Apart from the Garfield universe, I enjoy various things. Few examples of those are listed below:

Since I'm PC gamer, the list won't be a long one:

Apart from interests listed above, I'm also an amateur artist - you can find my works here on the Wiki http://garfield.wikia.com/wiki/User_blog:TeeJay87/My_artworks and on my Fanart Central account http://www.fanart-central.net/user/TeeJay87/profile .

If anyone would be interested in requesting a picture from me - I only draw those for people that I consider as friends. That means people I maintain regular contacts with on this Wiki and who have proved me being trustworthy. Alternatively, I may agree on an art trade, on the condition that I'm shown at least a raw sketch of the part for me.

Retrieved from "https://garfield.fandom.com/wiki/User:TeeJay87?oldid=127760"
Community content is available under CC-BY-SA unless otherwise noted.