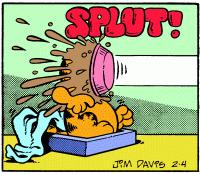 The Splut Pies are flying pies, which strike Garfield in the face at random instances, making the sound, "SPLUT!" on impact. Spluts are used for shock humor, or as a running gag (one of their appearances included Garfield checking the calendar to discover that it was "Splut Week"). Even with Splut pies being common in the comic strip, Jon Arbuckle still acts surprised when they happen. Odie seems to be immune to Splut pies.

Retrieved from "https://garfield.fandom.com/wiki/The_Splut_Pies?oldid=97200"
Community content is available under CC-BY-SA unless otherwise noted.