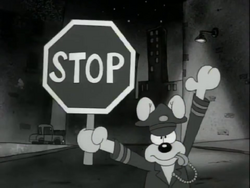 Sweet Tweet Treat
The Floyd Story is an episode from the sixth season of Garfield and Friends.

Floyd's wife demands that he ask Garfield for more airtime on the show. Meanwhile, when Jon's pushy Aunt Prunella visits, Garfield attempts to get rid of her.

Garfield is being chased by a bulldog. Floyd ends the pursuit by leading Garfield to a simple trap prepared from a tree branch - once Garfield crosses the safety zone, Floyd releases the twig directly at the running dog, causing the canine to fly in the air and land in a puddle of mud. Garfield thanks Floyd for the rescue.

The scene, played on video tape, is being watched by Floyd and April in their mouse hole home. April uses this scene to convince Floyd that he deserves more airtime in the cartoon. The failed attempt at soft persuasion causes her to throw Floyd out of their mouse hole, just when Jon is preparing himself for his upcoming guest.

Odie looks at Jon and wonders what is going on, to which Garfield says that Jon's Aunt Prunella is coming and wants to make a good impression on her. Garfield then goes to bed when Floyd wakes him up. Recovering, Garfield is upset as he wonders if Floyd is taking lessons from Nermal but is also shocked because according to the script, Floyd is not in the episode. Floyd then tries to convince Garfield to get more airtime on the show, with Garfield being unsure.

At that point, Aunt Prunella arrives and then takes advantage of Jon from carrying her luggage and getting her someplace to sit. Floyd meanwhile lists all kinds of things he can do on the show but Garfield still says there is no slot available to him to which Floyd leaves for another job. Just then Garfield hears Prunella complaining about the cookies and what to make for dinner much to Jon's dismay and Garfield tells Odie that Prunella's acting like him.

Jon finally reaches a breaking point at dinner when Prunella criticizes his job as a cartoonist and ask Garfield to get her to leave to which Garfield agrees. From there, Garfield tries different ways to make Aunt Prunella leave from eating her cake, to playing loud annoying bagpipes and starting a mud fight. However all these tactics make Prunella stay even longer. Looking for a solution, Jon asks Prunella if there is anything that scares her and she says mice do and is glad there are none.

Hearing this, Garfield is surprised that there is room in the episode for Floyd after all and he and Odie decide to find him. The two find him in a local bar in an alley trying to get another mouse to believe he is on the show. Garfield then emerges, tells him about his problem, and asks him to come back which he does.