Clean inanimate or animate objects depending on setting

The TI-D 7000 was a cleaning robot which appears in The Garfield Show episode The Robot. It was sold to Jon Arbuckle by its salesman, Mr. Sellers, who does not warn Arbuckle about the robot's functions.

The TI-D 7000 is a spherical red robot with a yellow chest area, antenna, ring, wheels, and two mechanized claws. In addition, it has two light bulbs at the side of its body, and two orange lights acting as eyes.

More to be written. 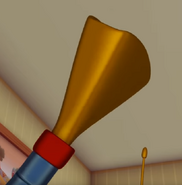 The TI-D 7000's vacuum
Add a photo to this gallery
Retrieved from "https://garfield.fandom.com/wiki/TI-D_7000?oldid=106556"
Community content is available under CC-BY-SA unless otherwise noted.