Petey (voiced by Frank Welker) was Mrs. Wilson's pet canary who tried to get Garfield in trouble by coaxing him to eat him. He eventually escaped by pretending Garfield was about to eat him, and flying through an open window. Mrs. Wilson was devastated, while Mr. Wilson was ecstatic due to his hatred of Petey.

Petey is a small yellow bird.

He has tried to get Garfield in trouble a couple of times. He has wanted to be free from Mrs. Wilson. 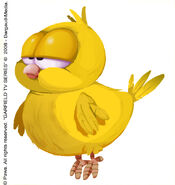 Add a photo to this gallery
Retrieved from "https://garfield.fandom.com/wiki/Petey?oldid=117825"
Community content is available under CC-BY-SA unless otherwise noted.