The Pet Search Contestants were various acts for the show: Pet Search, appearing on local and national versions.

The winner of the previous week's Pet Search before Jon and his pets competed. Dan's act is to rock in his rocking chair while playing his banjo and singing about how his dog Blue sings good (which is done by rocking back onto Blue's tail, making him howl in pain).

A man who got his dog to do tricks, though the audience was not impressed.

A man with a parrot, who was supposedly meant to mimic his owner. He said nothing, so Pierre naturally got booed.

They appear exclusively in the animated special.

Grandma Fogerty and the Amazing Petey

An old woman who tried to teach her deceased pet to do tricks.

A man who claims it took him 17 years to teach his pigeons how to tap dance.

Johnny Bop and the Two Steps

Jon, Garfield, and Odie in a rock and roll act, Johnny Bop and the Two Steps, with Jon dressed up like Elvis Presley and the other two in 1950s outfits. They performed the song "Wizard of Love". Their act received notable applause, and was the only one not booed at the end, thus granting the trio victory.

A fish who was able to jump through a small hoop was featured as a contestant. It was ultimately eaten by Garfield (who was "eliminating some competition").

A roller skating bear who was featured as a contestant, but went out of control with the roller skating. The bear runs into Herbie after the latter's act fails. Although silent in the special, he has a tendency to scream in the book adaptation.

A man tried to cheat on the show as Bob the Wonder Dog, whose talent was being able to perform five instruments (harmonica, horn, drum, piano, and banjo (with hand for playing the piano)) simultaneously. However, Odie manages to expose his act, leading to a disqualification.

A woman and cat with a tenuous relationship. Credited as Backflip The High-Diving Cat, Backflip's act was to jump from a plank into a tub of water. Being a cat, Backflip refused to dive out of fear until his owner shoved him off the plank. He is later seen dripping wet and desperately trying to escape his owner's grip.

They appear exclusively in the book adaptation.

A trio of singing chickens. They scored fifth place in the finals.

A group of acrobatic dogs. They scored third place in the finals.

A whistling canary. He scored fourth place in the finals.

A dancing duo consisting of Garfield and Odie in costume. They scored second place in the finals.

An operatic singing cat with a voice that can literally shatter glass. She scored first place in the finals.

A pig was shown playing on a piano.

A trio of dogs were shown doing ballet.

Grandma Foggerty and the Amazing Petey

Johnny Bob and the Two Steps 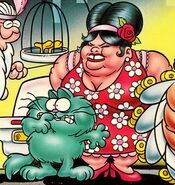 Ballet Dogs
Add a photo to this gallery

Retrieved from "https://garfield.fandom.com/wiki/Pet_Search_Contestants?oldid=87607"
Community content is available under CC-BY-SA unless otherwise noted.