Mrs. Arbuckle is Jon Arbuckle and Doc Boy Arbuckle's sweet, home-focused, bubbly mother, who lives on a farm and is known to be a great cook, offering a wide variety of food for Jon to eat when he visits, especially her ability to create dozens of potato-based dishes. Based on Jim Davis' mother, Jon's mother is also known for sending him and Garfield cooked meals in packages. In the Garfield and Friends episode, "Feeling Feline," she has a speaking line along with Jon's father (who has no dialogue) in Jon's dream and she also appears in The Garfield Show.

She has short brown hair, and usually wears a blue and white dress with a pink and white apron and blue high heels.

Her main role, as depicted in the franchise, is being Jon and Doc Boy’s mother. 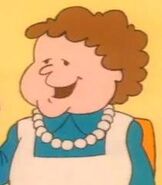 Mrs. Arbuckle in The Garfield Show

Add a photo to this gallery
Retrieved from "https://garfield.fandom.com/wiki/Mrs._Arbuckle?oldid=135230"
Community content is available under CC-BY-SA unless otherwise noted.