Louis is a friendly, cuddly, timid, gold-brown mouse, who often helps Garfield and is rewarded with macadamia nut cookies. He invades Jon's house.

In Garfield: The Movie, the silence was broken by the sound of squeaking. It was a mouse and his name was Louis. When Jon spotted the mouse, he exclaimed "Mouse!" Garfield also spotted him. He begins to run, Jon also runs and tries to catch the mouse instead of Garfield. Louis keeps running and runs out the door. Jon accidentally steps on a purple ball and lands on the floor, he was upset after he failed to catch the mouse.

Garfield runs outside the door and catches up to meet Louis, who was standing there. Louis turns out to be Garfield's secondary friend. Garfield warned his friend, that he should not be running around the house when Jon is in there. Louis begins to groan after Garfield has to eat him. Jon sees Garfield eating Louis in his mouth. The mouse's tail is hanging out of Garfield's mouth. Jon is proud of Garfield. When a happy Jon leaves, Garfield spits Louis out and he lands on the ground so Garfield spares his life. He only did it so Jon wouldn't hurt a mouse. Louis says "Cool!" He begins to leave on the street.

Fortunately, when Garfield was finding The Telegraph Tower while searching for the dog, Odie. He was surrounded by the street rats (Louis' family and relations). Garfield explains to them that he is "100% body fat" He heard Louis moving his relations out. The conniving cat said to Louis while Jon got Odie who was got kidnapped by Happy Chapman while Garfield tried to rescue him. Garfield remembers Louis likes macadamia nut cookies and Louis explains "I do love the macadamias" He explains to his family and relations Garfield is with him. His relations were upset as they all left.

Louis said "Animal control" and guides Garfield to The Telegraph Tower. On the road, Louis is in a Chinese food box and Garfield is in a big blue recycling box while crossing the street. They both stopped, Garfield give Louis a signal when the voice is heard, Louis runs to a Chinese food box and climbs in it, Garfield was hit in the blue recycling box by a car. Louis yells to Garfield "Don't move." During the traffic lights, "DON'T WALK" turns into "WALK" until all of citizens are walking after Garfield yells "STAMPEDE!" As Louis wails after Garfield was gone, he sees Garfield, who was alive and on top of the traffic lights.

Garfield was okay, he and Louis found something, The Telegraph Tower. Garfield thanked him a lot, and Louis left, now a heroic mouse. 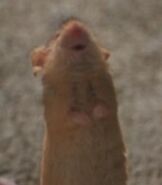 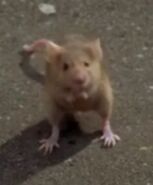 Is Louis a toy?

Louis is landed on the ground and was spitted by Garfield.

Louis in a Chinese food box.

Retrieved from "https://garfield.fandom.com/wiki/Louis?oldid=104062"
Community content is available under CC-BY-SA unless otherwise noted.