Dr. Elizabeth "Liz" Wilson (first appearance June 26, 1979) is Garfield's sarcastic veterinarian and the long time crush of Jon. Although she has somewhat of a deadpan sardonic persona Liz rarely reacts negatively to Jon's outlandish and goofball behavior, even finding it endearing on occasion. In the live-action films Garfield: The Movie and Garfield: A Tail of Two Kitties, she became Jon's "girlfriend". In the strip, Jon had attempted to ask her out on a date many times over the years, but rarely succeeded. She sometimes agreed to date him but those outings usually became disaters (often thanks to Garfield tagging along for the ride). However, in a series of strips from summer of 2006, Liz finally admitted that she had feelings for Jon. The two have been portrayed as a couple ever since. In a few of the July 2007 strips, Garfield became jealous of Liz, until they became friends on July 24. In Garfield: A Tail of Two Kitties, Jon proposes marriage to Liz and she accepts However, this is not mentioned in or connected to the strips. Also in the comics it's suggested that Liz's Birthday is somewhere around July 20th. 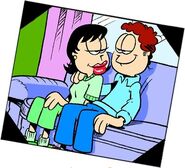 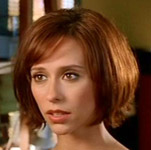 Retrieved from "https://garfield.fandom.com/wiki/Liz_Wilson?oldid=17760"
Community content is available under CC-BY-SA unless otherwise noted.