Lasagna is an Italian dish and Garfield's favorite food. It was first shown on the July 15th of 1978 comic strip, where Garfield described lasagna as "nature's most perfect food."

Lasagna appears occasionally throughout the comic strip. It appears regularly in Garfield and Friends; it is available at locations such as the Short Branch Cafe and Momma's Pizzeria.

In Garfield: The Movie, Garfield eats all four boxes of Jon Arbuckle's lasagna. He later eats some after falling into a truck of it. In Garfield: A Tail of Two Kitties, when Jon is giving the veterinarian Garfield's things, he requests that she feed him a plate of lasagna every day. After the switch, Jon, Liz Wilson, and the Prince go to a restaurant, where Prince discovers his love for lasagna. At the palace, Garfield helps the animals prepare a platter of lasagna, where everyone enjoys it.

In Here Comes Garfield, Garfield eats a pan of lasagna in the kitchen before heading to the City Pound. In Garfield on the Town, Garfield is seen eating lasagna during a flashback in a former Italian restaurant, and Jon serves him lasagna after finding him.

Gabriel waiting for his batch. 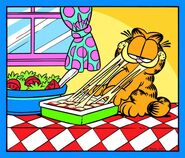