Garfield Wiki
Register
Don't have an account?
Sign In
Advertisement
in: Cats, Male Characters, The Garfield Show,
and 4 more

Searching for food
Listening to Garfield's stories
Chasing birds
Hanging out with the other stray animals
Harry is a cat who Garfield often encounters. Usually in the series, Harry is shown as Garfield's frenemy.

Harry is in many ways like Garfield, in that he is very badly behaved. Unlike Garfield, he does not seem to have quite as much morality.

Harry loves to eat birds, and on two occasions Garfield has had to save some bluebirds from being eaten by Harry. He has also been able to get jobs on occasion, including one with Dr. Whipple where he pretended to be well-behaved. It annoys Harry greatly that Garfield usually tries to foil his jobs unintentionally and provides some gaps of static in their friendship. 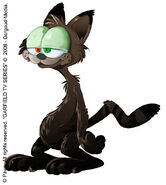