Grandma Arbuckle is Jon Arbuckle and Doc Boy Arbuckle's paternal grandmother, being the mother of Dad Arbuckle. Based off of Jim Davis's own grandma, she loves Jon, Garfield, and Odie, as well as the rest of her family. Much like Garfield, despite her few sarcastic remarks, she is still a loving and caring person. She occasionally makes appearances throughout the series. The most is revealed about her in A Garfield Christmas special, where it is revealed that her husband has died and she talks about her life with him. Grandma rarely appears in the comic strip (perhaps only 5 times) but played a main role in the Thanksgiving and Christmas specials.

Her comic strip appearance also carried to her animated appearances were she was depicted as an energetic elderly lady in a sweater and jeans, and she sometimes is also seen riding a motorcycle. 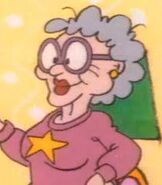 Retrieved from "https://garfield.fandom.com/wiki/Grandma_Arbuckle?oldid=127180"
Community content is available under CC-BY-SA unless otherwise noted.