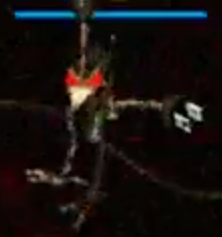 Glitch is the main antagonist, and final boss, of the video game Garfield Caught In The Act.

He is created when Garfield attempts to fix the TV that Odie broke (thanks to Garfield scaring him) before Jon could find out. However, he throws away the spare pieces, which transform into the electronic/metal monster, who decides to trap Garfield inside the TV.

When Garfield makes it to the final battle, Glitch attempts to fry the cat with red and blue fireballs, which bounce off the walls. Garfield then must align the mirrors in the arena so they hit Glitch. After Glitch takes enough damage, he disintegrates, allowing Garfield to reach the final remote control and return to the real world.

Retrieved from "https://garfield.fandom.com/wiki/Glitch?oldid=76400"
Community content is available under CC-BY-SA unless otherwise noted.