Garzooka (voiced by Frank Welker) is the leader of the superhero team Pet Force. His powers are gamma-radiated hairballs, superhuman strength, and razor-sharp claws in his right hand that can rend solid steel. While the original Garzooka was heroic and a born leader, the Garzooka created from Garfield is lazy and gluttonous, though he still focuses on the task at hand. 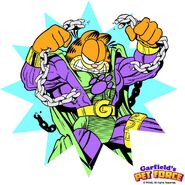 Add a photo to this gallery
Retrieved from "https://garfield.fandom.com/wiki/Garzooka?oldid=105801"
Community content is available under CC-BY-SA unless otherwise noted.