Garfield Originals is a 2D animated series, created by Jim Davis and Philippe Vidal. It premiered in France on December 6th, 2019 on France 3 and Okoo. It is currently available to watch on France.tv,[1] though it can only be viewed in France.

There will be 120 three-minute shorts. Five shorts will be divided into a single segment. There will be no dialogue, and will solely focus on the character's movements and expressions.

"Garfield is a lazy, self-centred and greedy fatty tabby who just loves to torment everyone around him! Eating and sleeping are his two favourite activities, but he also enjoys pestering his human, Jon, and his dog Odie – whenever he's not chasing after spiders, his personal pet hates.

Garfield is back with a new look and brand new adventures that will delight both old and new fans!

We won't be spared anything - especially not the most ferocious aspects of his personality - for better or for worse, but definitely a good laugh!"[2]

The series was first showcased on Dargaud Media and Mediatoon Distribution's websites, and later officially announced on Garfield.com.[3][4][5]

In an interview on June 15, 2018, Davis stated that it is the sixth season of The Garfield Show, although none of the websites advertising have provided evidence of such.[6]

Garfield Originals has been acquired by Viacom, as part of the company's purchase of the franchise.[7]

An animation studio by the name of Madlab Animations, originally created by Ankama Animations and Ellipsanime Productions, are set to produce the show. According to their website, they are currently looking for people to work on the show.[8][9] [10]

The show's music is being done by Olivier Rabat.[11]

Gérard Surugue and Véronique Soufflet reprise their roles as Garfield and Arlene, respectively. Both previously appeared in The Garfield Show.

The show premiered in France on 6 December 2019. It has yet to be released in the United States.

Images from the Show

The announcement of Garfield Originals. 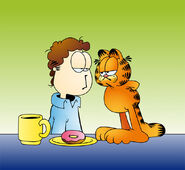 A prototype of the series' designs.
Add a photo to this gallery

Retrieved from "https://garfield.fandom.com/wiki/Garfield_Originals?oldid=118509"
Community content is available under CC-BY-SA unless otherwise noted.