Garfield Comics are written by Jim Davis, and published by Paws Incorporated in the United States of America, as well as in other countries all around the world.

Apart from publications, comic strips with Garfield can be seen on the official Website, as well as here.

Those are easy to be distinguished by their characteristic markings:

- price in US Dollars (and in Canadian Dollars) visible in front page cover;

- rear cover marked as "Cover printed in the USA";

- synopsis of the comics with example of strips in the rear cover.

Unlike American originals, those books have standard frame of pocket books with one daily comics strip per page split in parts. They can be recognize after following traits:

- rear cover has colorful image of Garfield standing and smiling (solid or hued, depends on year of publishing);

- only daily comics strips are displayed, since Sunday Specials were published separately;

- most of those issues have pre-order catalog of books in last pages with prices on GBP.

Those series are sometimes available abroad, mostly in Commonwealth and other countries, which had British presence in history.

Most of foreign Garfield comics books are either developed from original American issues or British issues released by Ravette Publishing. Layout depends on publisher, though there are some common traits:

- Polish issues from 1999-2005 period were translated British issues, which were later replaced by translated American issues (see gallery below). Some books from the first series of issue have publisher's (Egmont Polska) symbol in bottom left part of the corner. Those issues don't have price printed on cover - usually there is a sticker with price in the bottom part of rear cover;

- German issues are directly based on original American issues, for example here ; with price in German Marks (DM, till 2003) or Euros (since 2003)

- Croatian issues seem to be modified US issues with their own distinctive covers, they have written "Garfield Magazin" , number of the issue in upper part of front cover and price in local currency;

- Australian issues are the American ones, minus the price in Canadian dollars.

- South African issues are the exact same as the American, even keeping the dollar and Canadian dollar signs. 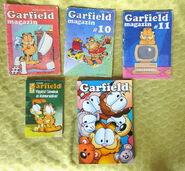 Example of British issue of Garfield comics. Notice the publisher mark in the bottom right corner.

Example of German version of US comics book. Published by Krueger.

Example of Dutch comics book cover.
Add a photo to this gallery
Retrieved from "https://garfield.fandom.com/wiki/Garfield_Comics?oldid=78464"
Community content is available under CC-BY-SA unless otherwise noted.