The Game Gear version included reworked level layouts and some different enemies; the only level designs bearing a resemblance to the original are Revenge of Orangebeard, the first half of Count Slobula's Castle (which now includes an actual castle maze section) and the second half of Catsblanca (which now includes a vehicle section much like the unused train area seen in magazine previews). In this incarnation, Garfield does not have different outfits in each level. As there is only one attack button, Garfield will perform a short-range punch once throwing weapons are depleted. Garfield is able to walk and run in this version; simply hold a direction to walk, and tap and hold a direction twice for him to run. There are no invincibility items, but there are secret passwords for invincibility and infinite projectiles. There is only one type of bonus stage (accessed by finding an icon of Arlene's face in each level), in which you try to wreck everything in Jon's living room within a time limit to get an extra life. In the between-level segments, you do not take damage from the obstacles; instead, electricity teleports you back. The new final level takes place in the TV Land, except it is overflowing with enemies (some from previous channels). Two of the level themes exclusive to the Game Gear version were apparently based on two of the so-called Lost Levels, although this is not completely confirmed.

A Sega 32X version of the game was planned for release, but was ultimately cancelled. 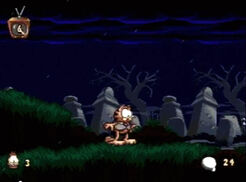 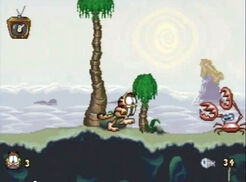 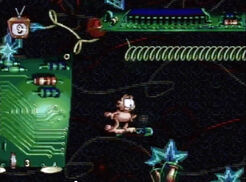 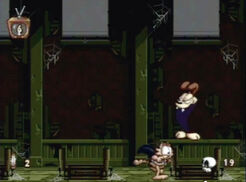 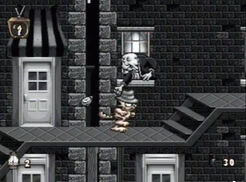 Add a photo to this gallery
Retrieved from "https://garfield.fandom.com/wiki/Garfield:_Caught_in_the_Act?oldid=33986"
Community content is available under CC-BY-SA unless otherwise noted.