"Don't call me Doc Boy!" - Doc Boy grumbles to Jon as his catchphrase

Doc "Doc Boy" Arbuckle is Jon Arbuckle's younger brother, who lives on a farm with his mother and father, and often fights with Jon, calling him a "cappuccino-sipping city slicker", and worse. He hates being called "Doc Boy", although he puts up with it. According to his father, this is a result of him starting to wear long pants, which occurred the Thursday before he disclosed the fact.

Doc Boy is just as immature as his older brother. He is shown to have a worse fashion sense than Jon and is sometimes portrayed as significantly less intelligent. Unlike his brother, Doc Boy likes mice.

Although generally ignorant of urban life, he does have one astute reason to remain on the farm: He figures that since he ultimately chose to stay on the farm while Jon moved to the city, he will inherit the farm from his father, sell the property, make a huge profit and retire while still young.

In The Garfield Show, Doc Boy has a farm of his own and is more serious and stern than he is in the strip. He does not get out much and is very dedicated to his job. He still dislikes being called, "Boy."

Doc Boy on The Garfield Show 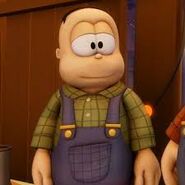 Add a photo to this gallery
Retrieved from "https://garfield.fandom.com/wiki/Doc_Boy_Arbuckle?oldid=127897"
Community content is available under CC-BY-SA unless otherwise noted.