Catzilla (voiced by Frank Welker) is an orange and black cat-like beast from the zoo. People say that because of his teeth, he is probably related to the sabre-tooth tiger. He appears in The Garfield Show episode Orange and Black, where he escapes the zoo and sneaks into Jon's house, but then gets outsmarted by Garfield and is sent back to the zoo. 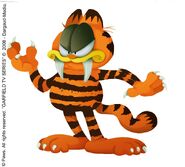 Add a photo to this gallery
Retrieved from "https://garfield.fandom.com/wiki/Catzilla?oldid=97215"
Community content is available under CC-BY-SA unless otherwise noted.