The birds are a running gag in the Garfield comic strip. Garfield tends to try to catch them (with varying degrees of success). 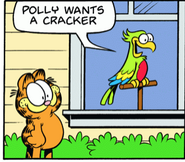 Add a photo to this gallery
Retrieved from "https://garfield.fandom.com/wiki/Birds?oldid=134287"
Community content is available under CC-BY-SA unless otherwise noted.