Aloysius Pig is a busybody pig in Garfield and Friends.

Aloysius bean-counts and nitpicks every detail, looking for anything that he might consider to be the least bit objectionable or cutting out anything that would be slightly considered over the show's budget or for something he just dislikes. He is also critical at those who make any objections to his actions (such as Wade asking him why he was put in charge of the farm or Orson trying to explain a story to him). This comes to the annoyance of the rest of the cast). His catchphrase is "That's not right!" As a result, everybody on the farm plots to get rid of him. 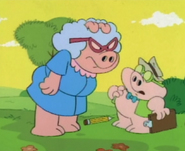 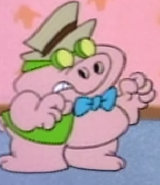 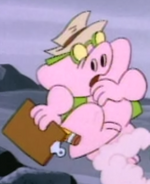 Add a photo to this gallery
Retrieved from "https://garfield.fandom.com/wiki/Aloysius_Pig?oldid=89178"
Community content is available under CC-BY-SA unless otherwise noted.